There are always obstacles on the roadtokona

No Caminoakona is without obstacle. It does not matter how strong you are or how fit you are we are all only flies on the wall. As little and as insignificant ass flies. I don't mean that what we do does not matter, of course it does i am considering more how much we take for granted the fact that we are alive and how fast it can all go away.
This morning, as almost every Thursday morning at 5;40 am we started our 60k bike ride. For today we had a especial surprise for my teammates who are training for Ironman Cozumel, Sebas and Malcolm. Sebas showed up just in time, he rad 24 kms and swam 4500 meters yesterday and showed up in time and ready to rumble.
We had Felipe with us. We left for the Causeway. Once we got there we started our real workout. A couple of tempos against the wind, with controlled heart race, sort of IM pace. Sebas was strong. He was controlling his speed and pulse like clockwork. It was all coming together. Five Kilometers before we finished our tempos, Sebas mentioned thought a bee had stung him. He also said he could possible have an allergic reaction and that in his jersey´s pocket he had an injection just in case he suffered and allergic attack. Woah, Felipe asked, so how do we put it on? Sebas explained it in 3 words, on my thigh, that's it.
We continued our tempo session for 5kms more. We had a head wind so our heart was pumping blood to keep the speed up. Suddenly after we finish the tempo and were enjoying our ride back home, Sebas said hey i dont feel well, im dizzy i think i need to stop.
Less that 10 seconds later he had stoped and was on the side of the road. 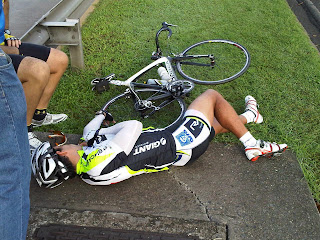 His pulse was above 100 bpm and he was lying on the grounf witout moving. He motions for the injection he had shown us and he could not do it himself, so I grabbed it from him and administered it. I really thought that he would just snap back in a second, he didint. % to 10 minusted went buy, or maybe less, and no improvement, call 911 said an off duty cop. He did and the ambulance was there within 15 minutes. Very good for Panama standards. 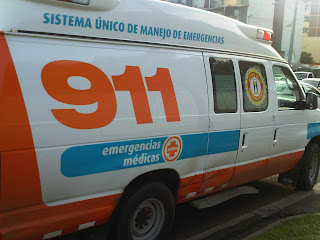 Sebas is now ok, he went to the hospital and got checked up. What has stayed on my mind is how vulnerable we all are. One little bee stoped my strong friend right in his tracks. Sebas is one of the strongest guys i know and to see him on the ground having trouble was very hard for all of us.
What do we learn from this? Not to go our alone? I dint know, sometimes it cannot be avoided, always take your id and insurance info with your? Definately but still hard to understand. 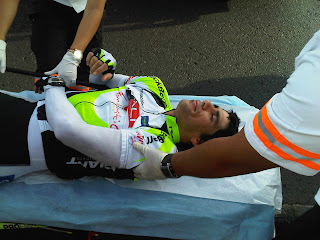 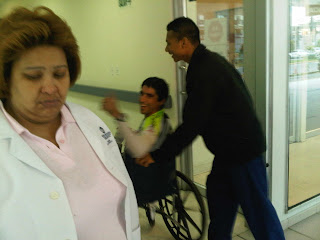 At 4 weeks from Ironman Cozumel Sebas is going to have to think hard and concentrate to be able to get back on track as soon as possible. At least now we know what to do and what to expect as well as other precautions that most be taken.
Posted by Labala at 15:22